As some of you may know, Behrouz Boochani’s book ‘No Friend but the Mountains’ has just won the Victorian Premier’s Literary Award, an esteemed literary prize that honours Australian writing and writers from many genres.

This is significant. For those unfamiliar with his story here is a short summary. Behrouz* is an Iranian asylum-seeker currently being housed on Manus Island, a ‘beneficiary’ of the Australian Government’s offshore processing scheme. He has been housed in detention for six years, detained indefinitely, after seeking asylum by boat from Indonesia.

Detained by multiple iterations of Australian governments over the years, asylum-seekers have been gifted with poor health care, unsafe living conditions without any hope of a better life. The country that they fled to, whose duty is to help and protect those people who are under their duty of care, lets them languish, slipping into catatonic depths of despair.

The book is composed through text messages Behrouz wrote in his native Farsi and then sent to his translator in Australia. His story is woven through poetry and prose, a story that echoes the same despair by those who sit neglected in detention camps, tortured from lack of hope or the will to live. 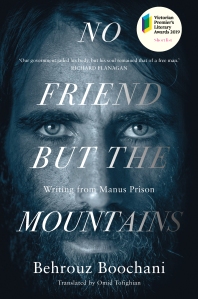 “My main aim has always been for the people in Australia and around the world to understand deeply how this system has tortured innocent people on Manus and Nauru in a systematic way for almost six years. I hope this award will bring more attention to our situation, and create change, and end this barbaric policy.”

The significance of this prize, is the recognition that is given to that voice. The office of the Victorian Premier has recognised and elevated the voice who is being persecuted by our Federal Government. This subversion of authority by another branch of government may be the beginning of a stronger turning tide, both politically and more broadly throughout Australian society.

Of further significance is that this is the first time that this award has been given to a ‘non-Australian’ writer for their work, work which can be considered as one of the most important pieces of Australian writing from last year. The Conversation has unpacked this and more in their article here, so do take the time to read their piece.

To say that I hope you enjoy reading this book would be a strange thing, but I do hope for those that choose to read his story that you would be moved. Compelled to act and be part of a greater movement that steps away from narratives of fear and instead pursue compassion, kindness and seek to restore hope, dignity and freedom to those in our care.

*Behrouz Boochani graduated from Tarbiat Moallem University and Tarbiat Modares University, both in Tehran; he holds a Masters degree in political science, political geography and geopolitics. He is a Kurdish-Iranian writer, journalist, scholar, cultural advocate and filmmaker.